For the third year in a row DialMyCalls.com, a web-based voice broadcasting and SMS text messaging service, will be offering college students a chance to win one of four (4) $ 250 scholarships. Last year the company received over 12,000 entries and hopes to have an even bigger turnout for the 2015 Tweet For Success Scholarship Contest.

Following an extremely successful 2014 scholarship contest, DialMyCalls is thrilled to launch the third annual Twitter-inspired competition. This year the company has asked students to, in 140 characters or less, explain the benefits of online courses and degrees vs. traditional schooling.

Four students that are enrolled in college for the upcoming 2015 fall semester can enter to win one of four (4) $ 250 scholarships. Lengthy essay requirements for scholarships are a thing of the past as DialMyCalls offers students a shot a winning $ 250 with a submission that is 140 characters or less.

The DialMyCalls staff will go through and approve every tweet that is submitted into the scholarship contest. Every student that receives approval will be sent an email that contains a unique URL to acquire votes it is encouraged to share that link with friends and family via email and social media to receive as many votes as possible. Two (2) of the $ 250 scholarships will be awarded to the contest submissions with the most votes while the other two (2) will be selected by DialMyCalls staff members.

The 2015 DialMyCalls.com Tweet For Success Scholarship Contest ends on September 18, 2015 and the four winners will be notified within 7 days after the contest deadline winners will be officially announced once verified.

Enter for a chance to win one of four (4) $ 250 scholarships by submitting a unique Twitter-inspired message, in 140 characters or less, explaining the benefits of online courses and degrees vs. traditional schooling. To view the official rules/guidelines and enter a submission for DialMyCalls’ third annual Tweet For Success Scholarship Contest, please visit http://www.DialMyCalls.com.

DialMyCalls.com offers an extremely effective and efficient voice broadcasting and SMS text messaging service. Schools all across the United States have been utilizing the school notification system offered by the company to keep in contact with faculty, students and parents via phone call, text message and email. Year after year DialMyCalls continues to offer upcoming college students the chance to win a scholarship by entering their annual Tweet For Success Scholarship Contest.

For more information, please visit http://www.dialmycalls.com or call (800) 928-2086. You can also email tsmith(at)ontimetelecom(dot)com for additional information.

The Thomas Scattergood Behavioral Health Foundation is a Quaker-based, philanthropic, grant-making foundation committed to raising its voice to improve the system through which behavioral healthcare is delivered.

The SoundsLikeIBS Program App is designed to guide the IBS sufferer through 5 therapy sessions that ultimately result in the patient’s ability to manage and control IBS symptoms so that the user can lead a normal life again. The program comprises 3 steps (a clear introduction, 5 therapeutic sessions, plus an additional bonus track explaining IBS for family members) that have been developed over a period of years based on the successful treatment of clinical patients.

A model for value-based purchasing, the related Pro App enables healthcare providers, and those managing rising risk populations to monitor the progress of each patient (with permission) and have access to all patients data within the IBS population.

The App and protocol are a researcher’s Go To Tool providing data that can be viewed in real time or in standard formats.

Proponents of translational medicine will recognize the benefits brought by the SoundsLikeIBS App and Pro App, bringing proven methodologies within new technology, increasing swiftness of treatment delivery to patients, and the benefits of unique data analysis tools to research and medical professionals. 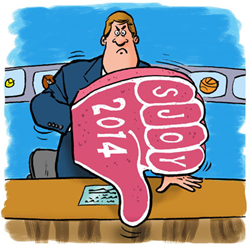 Providing sports fanatics with the opportunity to voice opinions on the distasteful acts committed by sports figures in 2014, nominations are now open for the annual Tank McNamara Sports Jerk of the Year Award.

The Tank McNamara Sports Jerk of the Year Award is not really celebrating bad behavior, Tank McNamara co-creator Bill Hinds said. Its shining the flashlight of shame on the scurrying cockroaches of sports.

The Sports Jerk of the Year Award winner will be announced on Friday, February 20 via the GoComics blog, its social media outlets, the Tank McNamara Facebook page and the Tank McNamara comic strip, available in hundreds of publications.

The activities of the brats, scoundrels and cheaters of sports will cause dark clouds to boil overhead until the heavens open up and pound them with a deluge of scorn and shame, Hinds said. Until then, there is the Tank McNamara Sports Jerk of the Year.

Co-created in 1974 by Bill Hinds and the late Jeff Millar, Tank McNamara successfully merges the sports and comics worlds with sizzling satire of the absurdities in big-time athletics.

Hinds and Millar met in 1973 when Millar who once said he couldn’t even draw stick figures went out looking for a collaborator for an adult-oriented comic strip about sports. Tank McNamara began syndication through Universal Press Syndicate in August 1974.

From 2001 to 2010, Hinds also wrote and illustrated the comic strip Cleats, which focused on the complex world of competition and camaraderie from the perspective of kids, parents and coaches. Hinds and his family currently live in Spring, Texas, a suburb of Houston, which is his hometown.

Tank McNamara is available online at gocomics.com/tankmcnamara or via the GoComics mobile app.

Universal Uclick is the largest independent content syndicate in the world and a leading digital entertainment provider of humor, comic strips, political cartoons and other content for print, Web and mobile devices. Universal Uclick provides editorial development, licensing and other distribution services for iconic brands such as Doonesbury, Dear Abby, Miss Manners and some of the most significant comics in history, including Calvin and Hobbes, Garfield, Peanuts, Dilbert, For Better or For Worse, Cathy and Ziggy. Recent standout successes include Lio, Cul de Sac, Pearls Before Swine, Get Fuzzy, Big Nate and The Argyle Sweater. A full comic catalog can be found at GoComics.com or via its mobile/tablet app on multiple platforms. For more information on Universal Uclick, visit UniversalUclick.com. To stay informed about news pertaining to Universal Uclick, its content and creators, follow the companys Twitter handle @UniversalUclick.

GoComics, from Universal Uclick, is home to many of the most popular comics and cartoons in the world. GoComics.com is the Web’s largest catalog of syndicated newspaper strips and webcomics, offering new, fresh and free content every day. Classic and iconic comics include Peanuts, Calvin and Hobbes, Garfield, Ziggy and Dilbert. Recent successes include FoxTrot, Get Fuzzy, Pearls Before Swine, The Argyle Sweater, The Boondocks and Cul de Sac. GoComics is also home to Comics Sherpa, the site where aspiring cartoonists can showcase their work and receive feedback from the comic community. With content from critically acclaimed comic creators, Pulitzer Prize-winning editorial cartoonists and the hottest up-and-coming talents, GoComics is guaranteed to have something that will make you smile. A full comic catalog can be found at GoComics.com or via its free mobile/tablet app on multiple platforms.