Livefyre is quickly ramping up its New York based employees to support the over 200 leading digital publishers and media and entertainment brands that it counts as customers, many of them based in New York and throughout the East Coast.

As Livefyres Enterprise customer base continues to grow, so has our need to increase our on the ground workforce in New York. Our new office will be able to support our East Coast based customers more effectively by being in their time zone, explained Livefyre founder and CEO Jordan Kretchmer. Being close to our customers and in the middle of New Yorks media and technology scene is a huge advantage for Livefyre as our network expands.

Bruce Ableson, Livefyres newly named VP of Client Solutions commented, Im thrilled to be a part of Livefyres expanding New York team. This location will be crucial in helping Livefyre maintain its high level of customer service and ability to create strategic solutions for companies looking to integrate social throughout their sites and apps.

Founded in 2009, Livefyre was named one of the best places to work in San Francisco by the San Francisco Business Times. For more information, visit http://www.livefyre.com.

Over the last three years, Cireson has emerged as a world leading authority on Microsoft System Center, offering apps and services around the revolutionary platform and continually innovating with solutions such as the Cireson Portal and Asset Management for Service Manager. As a preeminent voice of the community and with a far-reaching customer base in over 45 countries, Cireson now is excited to expand their global footprint, increasing their strong presence within and around Europe.

Paul Sutton, Cireson co-founder remarked, London is one of the top business hubs internationally with close proximity to Europe. We have tripled our customer base in just 12 months, which is incredible, and a testament to the dedication and enthusiasm of the Microsoft System Center community. Being based in London now allows Cireson to be even closer to our customers, a highly qualified talent pool, and industry thought leaders. London is the digital heart of Europe, and we are proud to now officially be part of it all.

The Cireson team is very pleased to add this new location as a main hub for U.K and European sales and support operations that align with local time zones. With offices currently in San Diego, Park City, Houston, New York, San Francisco, and Seattle, this will be the organizations first move outside of North America, which is a major milestone and a thrilling development for the company.

We have seen strong growth in the British market in 2014 and have acquired many new customers and partners. said Chris Lim, the UK Sales Manager who recently joined the Cireson team. Im extremely excited to come on board at a time when expansion is such a key part of Ciresons success. It makes sense to be physically present with a local team in order to support our rapidly growing U.K community.

In 2015 Cireson plans to persevere in their unrelenting pursuit for constant innovation and re-imagination within the IT realm. Their team of devoted, fanatical experts continue to change the game for analysts, end users, and help-desks everywhere. Keep an eye out for some big news in early 2015 with the announcement of Ciresons Password Reset app.

Also, join Cireson for the webinar detailing this new announcement by registering for the “Cireson Now in the UK” webinar here. (Wednesday, Dec. 10th, 2014 @ 10am GMT)

Cireson is a world-leading authority on Microsoft System Center. With 100% focus on the revolutionary platform, their team of experts deliver full-service System Center and Asset Management solutions to medium and large enterprises. Through their customer-centric Cireson Consulting Services and platform-extending applications available through the Cireson Store they offer clients a dynamic System Center experience that is unparalleled. Cireson is located in San Diego with offices throughout North America, and proudly boasts some of the brightest and most fanatical IT professionals in the industry. To learn more about Cireson, visit http://www.cireson.com. 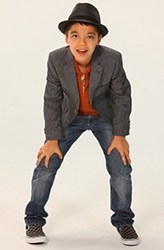 The Gordon Center for the Performing Arts premiers its season with Ethan Bortnick, a child prodigy and piano virtuoso, who rivals any star born from Americas Got Talent or American Idol. Having started playing on a toy piano when he was three, Ethan Bortnick is now 13, a piano prodigy, and holds the Guinness World Record for being the youngest musician to host a solo concert tour. Not only is he a young recording artist, but also a young philanthropist who raises money for numerous causes. In fact, Bortnick joined notable icons Celine Dion, Black Eyed Peas, Justin Bieber, and Elton John as the youngest in a lineup that recorded We Are The World 25 for Haiti. While he may be young, Bortnick is a stellar performer who will astound any audience with his virtuosity.

When he first started picking out melodies on his toy piano, he began begging his parents for formal lessons on a real piano and readily picked up composers such as Beethoven, Mozart, jazz pianist Bill Evans, Little Richard, and Elton John. By age five, he began writing his own songs and by nine appeared on Oprah, where he was named one of Oprahs All Time Smartest, Most Talented Kids.

From there, Bortnick began his trek toward super stardom, having been featured on national late night and morning television shows, including multiple appearances on The Tonight Show with Jay Leno. In 2010, Bortnick released his debut CD and DVD, Ethan Bortnick & His Musical Time Machine (Razor & Tie), a collection of covers of well-known pop songs and impressive original compositions and since then has toured the world, connecting with diverse audiences in countries such as South Africa, Brazil, and Australia.

Bortnicks musical repertoire evokes a diverse sensibility and a plethora of tastes not usually present in a twelve-year-old. Onstage, he performs jazz, classical, rock n roll, and his own memorable originals. He has the musical equivalent of a photographic memory and is able to instantaneously pull up songs to dazzle an audience, dependent upon its particular tastes. Sets can range from Beethoven, to the Beatles, to Justin Bieber.

Ethan completed shooting a full-length feature film called Anything Is Possible which will be released in September, 2013. He co-wrote all of the songs in the film and scored all the background music; a soundtrack will be released simultaneously with the film. Ethan will star as Nathan, the main character, and the touching tale will reflect Ethans sense of optimism and his commitment to bring warmth and happiness to kids and families worldwide. Its a fitting storyline for a boy who is on an epic music-career journey, but remains pure and humble when sharing his talents.

Bortnick has raised more than $ 30 million for different charities, including Children’s Miracle Network Hospitals, which stems from his reaction at five years old to his younger brother having three heart surgeries, while young.

Bortnick is the son of Ukranian immigrants and remains humble about his achievements. His performance is the opening of a Russian Festival that is being hosted by the Associated, the Jewish Federation of Baltimore at http://www.associated.org.

The Gordon Center can be viewed at http://www.gordoncenter.com.